In Indian History Vedic Period is the period between 1500BC to 600BC.

This civilization was developed on the basis of rural economy.

Also known as the period of Aryans(people of Vedic Period)

Many historians believes that Aryan came to India from Central Asia through Khyber Pass which is located at Hindukush Mountains in several stages or waves during 2000 BC-1500BC.

It is indicated in the holy book of  Iran ‘Jaind Avaista‘ that Aryan came to India via Iran. 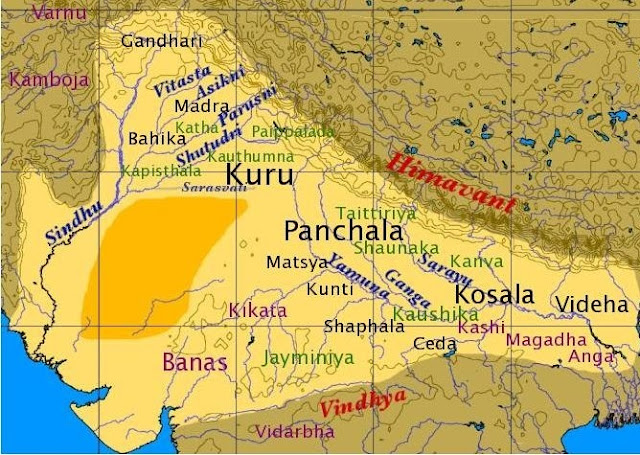 
-Group of  Vish formed Jan and head was called Rajan.

-Early period Rajan was elected by citizens but in later stages it was on hereditary  basis.

-In Rigvedic period Kind was not the owner of the land  but he was mainly the leader of the wars but cannot be part of Wars personally.

-Death penalty or expulsion from the kingdom to those who kill or harm cows prescribed in Rigveda.

-In Rigveda there is discription about Sabha, Samiti, Vidath, Gana. and females also joined these Sabha and Samities. Main function of Sabha was to do the justice and Samiti was for electing Rajan.

Cheating , theft, burglary, cow stealing were some of the crimes of that time.

Rigvedic Culture was based on family, primarily monogamous and patriarchal. Kulpati had the control and influence in the family, fathers property was inherited by son.

Vocations were given to persons according their interests and ability and the occupations had not become hereditary as they became later on.

Society was comprised four Varnas, namely Brahmana, Khashatriya, Vaisya and Shudra. The discription of these Varnas were given in Purushsukta  in Tenth Mandal of Rigveda. In this the discription about the origin of Four Varnas is given in stories that origin of Brahamans from the mouth of Brahma, Khshatriya from Arms, Vaisya from Legs and Shudra from the feet.
Sur and Soma alcoholic drinks were also consumed.
Cow was reckoned as the wealth of Aryan people.
Music, dancing, Chario-racing and dicing were the main source of amusement.
The meat of fist, birds and animals were consumed by the people.
Milk and its product were consumed.

Niyoga  was there by which widow could marry the younger brother of her deceased husband.
Child marriage was not there but intercaste marriage was present.
Both male and female used to wear ornaments made up Gold, Silver, Bronze, Elephants teeth. and of expensive stones.

The bronze smiths were very skilled, and developed tools and weapons of superior quality then those of Harappan Culture and astisans like carpenters, weavers cobblers, potters were also there.
Various animals were domesticated.

Market and money were known but they were not used extensively.

Most of the wars were fought for cows (considered as most important form of wealth) Cattle were also used as currency and the values were counted in heads of cattle . Mans life was counted equivalent to that of 100 Cows. The horse was also important like cows. 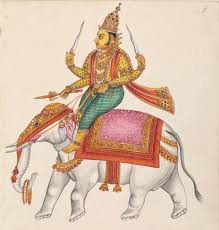 People personified the natural forces and took them as living beings
.

Indra was the important divinity (breaker of forts-Purandar, god of storm and thunder.). Agni (fire god) and Varuna were also popular deities.

People of this time did not believe in erecting temple or idol worship. Worship was done through Yajnas.

The period is considered to be in between 1000 BC to 600 BC.
In the early stages people cleared the land by burning forests but later they used Iron tools.
Aryans expanded from Punjab to whole of the western Punjab and western UP along Ganga Yamuna doab(almost expanded to whole of Northern India and was also called Aryavarta).

Small settlements were replaced by powerful kingdoms.
Janpads were emerged like Kuru, Panchala, Kashi etc in Doab region.
Kingdoms were have special Army for protection of the region.
Presence of Purohita, Senapati, Sangrahita, Bhagdugha, Mahisi was in politics.

Society was divided in to Four parts which was initially based on occupation but later became hereditary, Brahmins(priest), Khshatriya(warrior),Vaishya (agriculturist and cattle trader) Shudra( servers of the upper three)
Women had freedom but their status was deteriorated in comparison to Vedic period.
There were joint families and father was the head of the family.
Persons life was assumed to be divided into four parts
Brahamacharya(upto 25years of age), Grihastha(25to 50years of age), Vanprastha(50 to 75 years) and Sanyas Ashram(75-100 years of age).
The Gotra appeared in this age for first time which signified descent from common ancestors.
Chariot racing was main sport and gambling was the main pastime.
Types of marriage in this period-
Brahma Vivaha– Marriage of a girls to a man of the same class.


Daiva Vivaha– Giving girls to the priest himself as his fees.


Arsa Vivaha– giving the girls to  a man after taking bride price of a cow.


Paishacha Vivaha– Involving the seduction of a girl while sleeping.