In the beginning of Twentieth Century historians thinks Vaidik Culture was the ancient culture. But after the excavation of Indus/Harrappa Civilization  in the third decade of twentieth century it was proved that there was Civilization before the Vaidik Culture.

It is also known as Harrappan Civilization because the remains of this civilization was firstly found in the place named Harrapa and mainly was situated at the bank of Indus river.

Rai Bahadur Dayaram Sahni (RD Sahani) was the First  who excavated the remains of Harrappa Civilization in 1921 and Rakhal Dass Banerji excavated Mohenjodaro in 1922. Consequent upon these excavation Director General of Archaeological Survey General John Marshal declared the excavation of Indus Valley civilization.

This civilization was spread in Punjab, Sind, Baluchistan, Gujrat, Rajasthan, Jammu and Western UP. 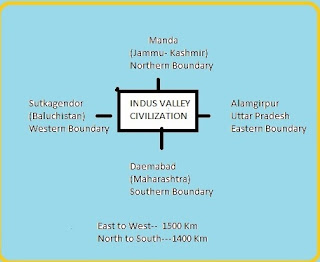 The main feature of this civilization was  town planning and houses and roads were build systematically on the lines Grid system and use of burnt bricks of good quality were used in constructions.Underground drainage system. Lamps posts at intervals indicate the existence of street lighting and  were well planned houses.
In Mohenjodaro a Great Bath have been found which is 11.86 meters long, 7.01 meter width and 2.43 meter deep with changing rooms. And this bath was mainly used holy baths. 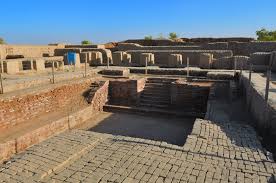 Towns were mainly divided in two parts
1. Upper part (Citadel) and Lower part. In Citadel the building were used for Public affairs, Food storage, market and Workshops and religious building. and people lived in the lower part.
2. Houses were often of Two or more storey, were different in size, but were quite monotonus. No window will faced the streets. The houses were having tiled bathrooms. 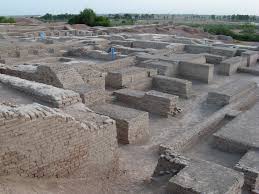 1. The main occupation in Indus Valley Civilization was Agriculture. Stone and Bronze was used for making tools for agriculture. Barley and Wheat was the main crop. Evidence of cultivation of rice in Lothal and Rangpur (Gujrat) was found. Dates, mustard, sesamum. Indus people were the first to produce cotton in the world(It was called  Sindon by Greeks)
Animals- Buffalo, humped & humpless bull, boar, dog, cat, pig, fowl, deer, tortoise, elephant, camel rhinoceros, tiger, Sheep.
Indus people did not know about Lion & Cow. A single instance of the Indian Rhinoceros has been reported from Amari.
Gold was imported from Kolar (Karnataka), Afganistan, Persia.
Silver was imported from Afganistan, Persia, South India.
Copper was imported from Khetri Rajasthan, Baluchstan, Arabia.
Tin was imported from Afganistan, Bihar.
Lothal was an ancient port of Indus Civilization
Agriculture products, cotton goods, terracotta figurines pottery, conch shell, ivory product were exported.
The Summerian texts refer to trade relations with Meluha which was name given the Indus Region and also refer to two intermediate station Dilmun & Makan (Bahrain & Makran coast respectively)
Harrappan Seals were found in Susa & Ur of Mesopotamian.
There is not evidence of coins, barter is assumed to have been normal method of exchange of goods.
It was urban civilization.
There is no evidence of polity, but it seems that authority of this civilization was a class of merchants.
Harrappan people did not worship their gods in temple. No temple has been unearthed. An idea of their religion is formed from the statues & figurines found.

The mostly found figurine is of Mother Goddess(Matridevi) or Shakti. There is the evidence of prevlance of Yoni (female sex organ)worship. 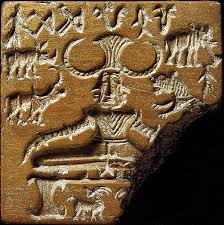 The male deity was the ‘Pasupati Mahadeva‘ was considered as the lord of Animals(Shiva) was minted in seals as sitting in yogic posture, he is surrounded by four animals elephant, tiger, rhino & buffalo and two deer in his feet. The prevelance of Phallic (lingam) was worshipped. 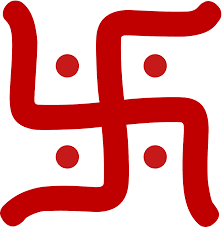